What the fxxxk a 100k Ultra Trail Run!

What the fxxxk a 100k Ultra Trail Run!

What the fxxxk a 100km Ultra Marathon?!  I think these were the first few words that came out of our mouths when Roger decided to challenge us to the Vibram HK 100KM trail run.
What the hell had I let myself in for?  Personally, Ive had my share of crazy endurance experiences in my military days but that had been a few years back. Now, I have gotten used to a less strenuous life and the joys of nasi kandar & hokkien mee (indulged only occasionally of course)
OK first thing first, lets have a planning meeting.  Mountains of questions lingered; how the hell do you train for an ultra, what do you need, how much sleep should you get, what about nutrition etc.
To be honest we were a bit unsure so I rang a few friends who had experiences in ultras  for advice, we  also talked to Malaysians who had completed ultra races, we  read books, checked blogs, bought magazines  and gathered as much information as we could for the planning process. I suppose a certain level of anxiety drove us; the fear of the unknown. But we were all mentally ready for the challenge and the best thing is, the training group collectively supported and motivated each other for the build up to the race. This pre-race training personally was the best part, that feeling of being in a team again on a mission of a shared purpose; it reminded me of times in the army.
The funny thing about ultra-running is that its actually 90% mental. We have a saying in Warrior Bootcamp that you must first mentally commit, focus (be self-disciplined), believe and finally achieve.  If you have any doubts or dont put in the training or preparation, you wont get there or even if you get there you wont be in good shape.
So what about the training? Well it included many long runs/trail runs normally back to back to build up the physical and mental endurance. Lots of field testing of equipment, weights, hydration and nutrition plans. Btw we always tried to train the same way we meant to fight with the same hydration system, weights and loads as in the race. We eventually developed the love for running in the rain ; nothing like waking up at 4am and running in a cold shower. It really super charges your day. Rain? What rain?
A few tips we learned were:  you dont need to spend a fortune on equipments but dont be kiam siap (stingy) either. We used Brooks trail shoes which were great,  also invest in a good pair of socks. I used the 1000 mile socks and had no problem. Wear compression shorts or cycling shorts as they will help to stop/prevent chaffing. I also recommend using Body Glide. Dry fit tee-shirt is fine and you dont need to look like Mr Compression but if you want to, thats fine. Also have a good peaked running hat and sunglasses. We also found that the calf compression guards were brilliant for longer runs and I would definitely recommend them.
So fast forward to the race day, I wont bore you with the details but lets say that the HK Vibram 100k was the best race I think I have ever entered to date. Why? Because the organization, the support & the spirit of the volunteers were simply AMAZING.  The people who organised this race really put in effort to prioritize the runners and the spirit of trail running to the fore.
The race itself started off with a run up a tar road then into a trail so jam jam & jam. The advice is to go slowly and get caught up the emotion and then head off fast, remember you have 99 km to go. 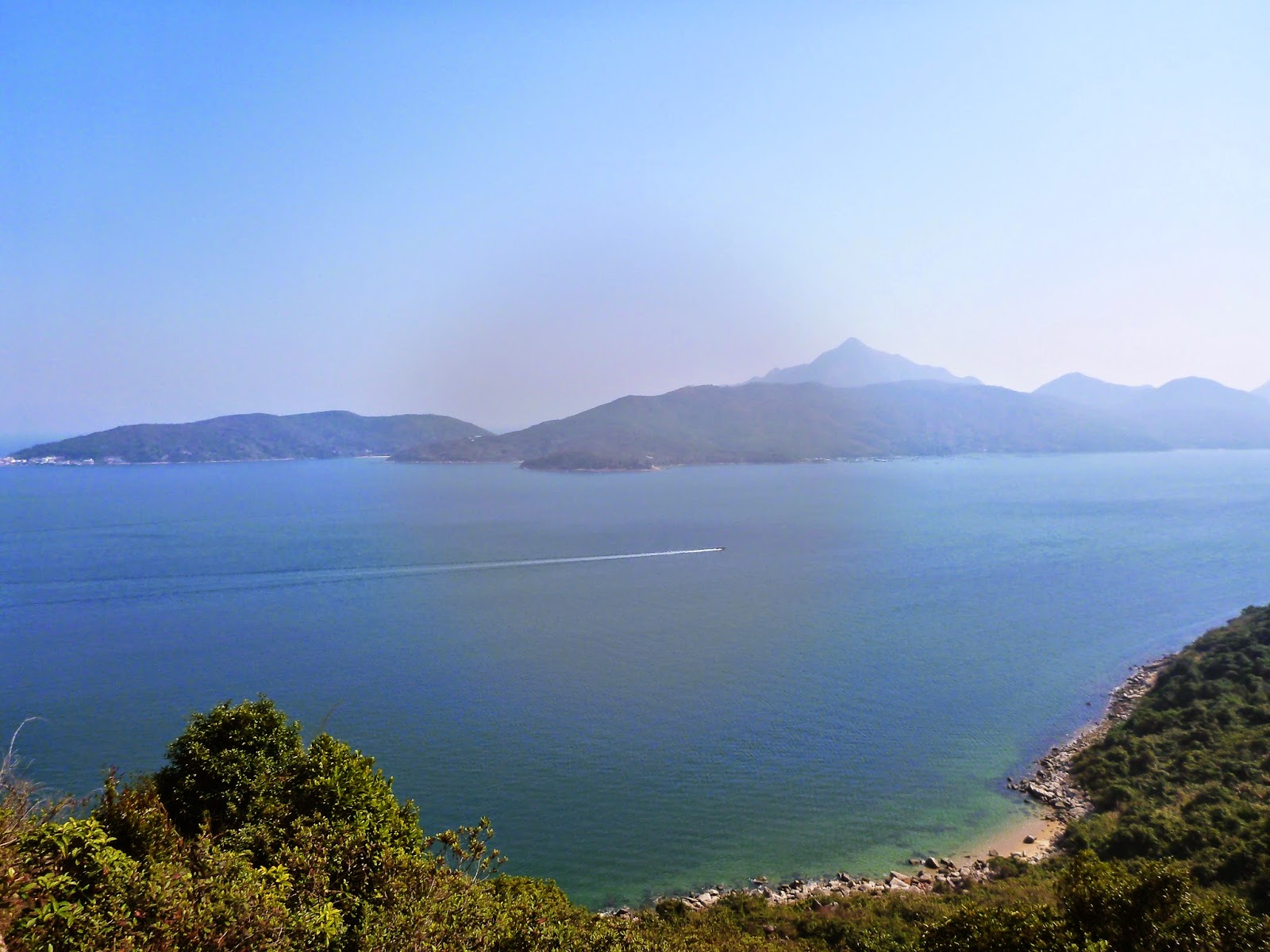 Anyway once we settled into the race, we eventually found our rhythm.  Trail runs are a bit different from road races as the terrain underfoot keeps changing which are both physically and mentally tiring.  Also you must have the agility and courage to decent slops at a good speed without damaging something. 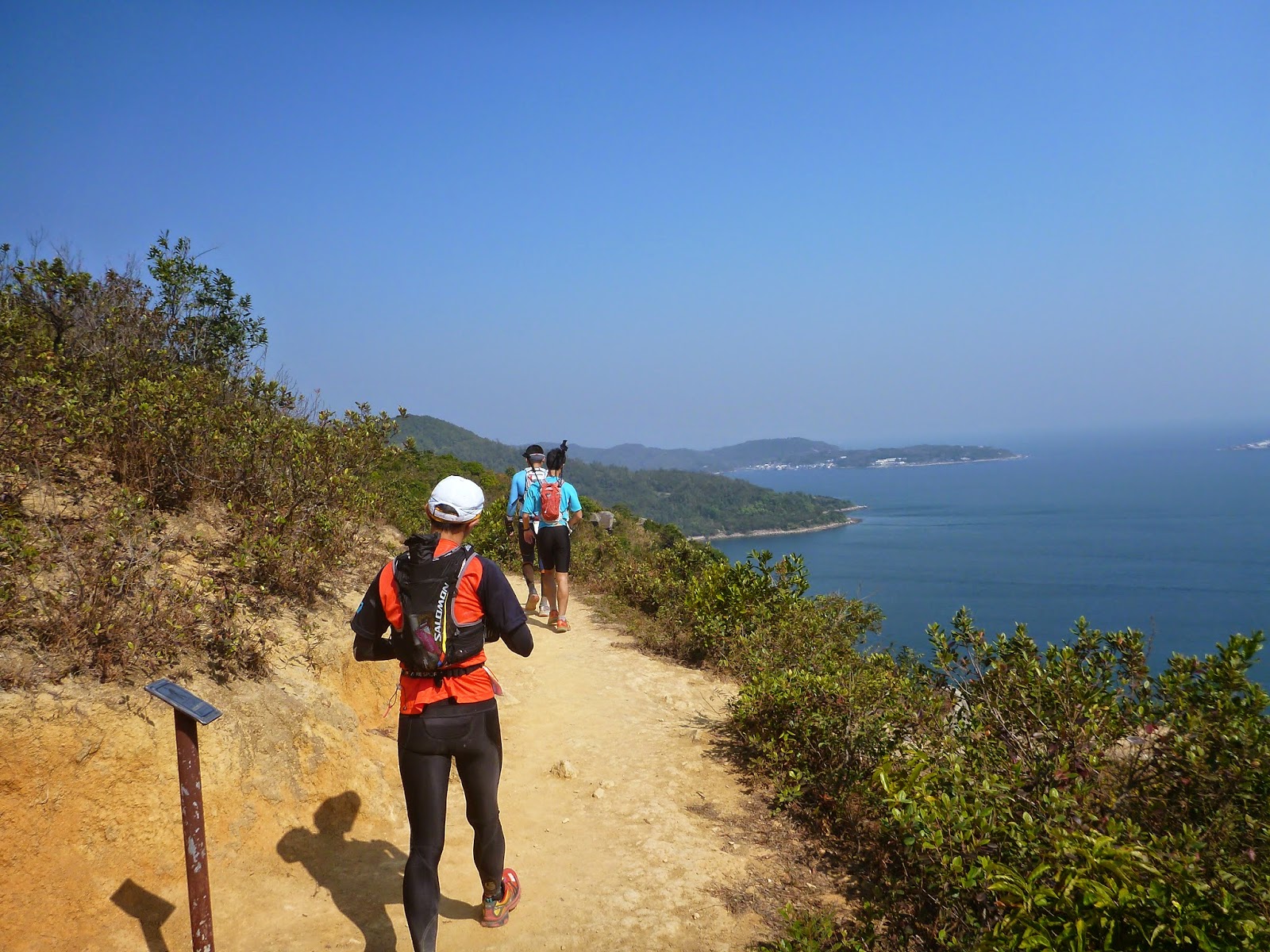 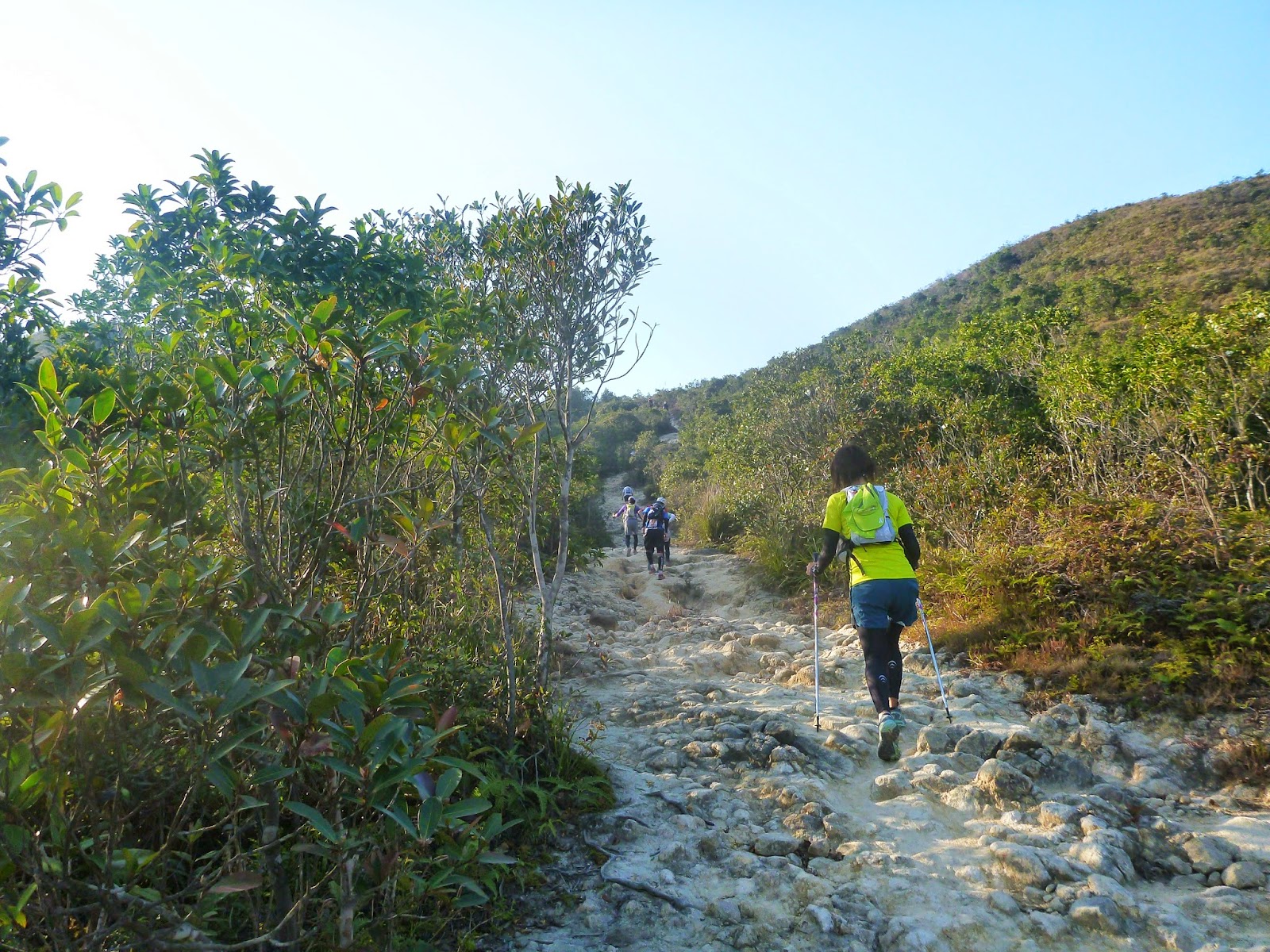 My advice is you need to set  and keep a comfortable pace;  dont head off and try to do your 42km personal best, trust me you will hit a wall. Also you must keep yourself optimally fed and hydrated throughout the race as it will also have a detrimental effect on your performance. 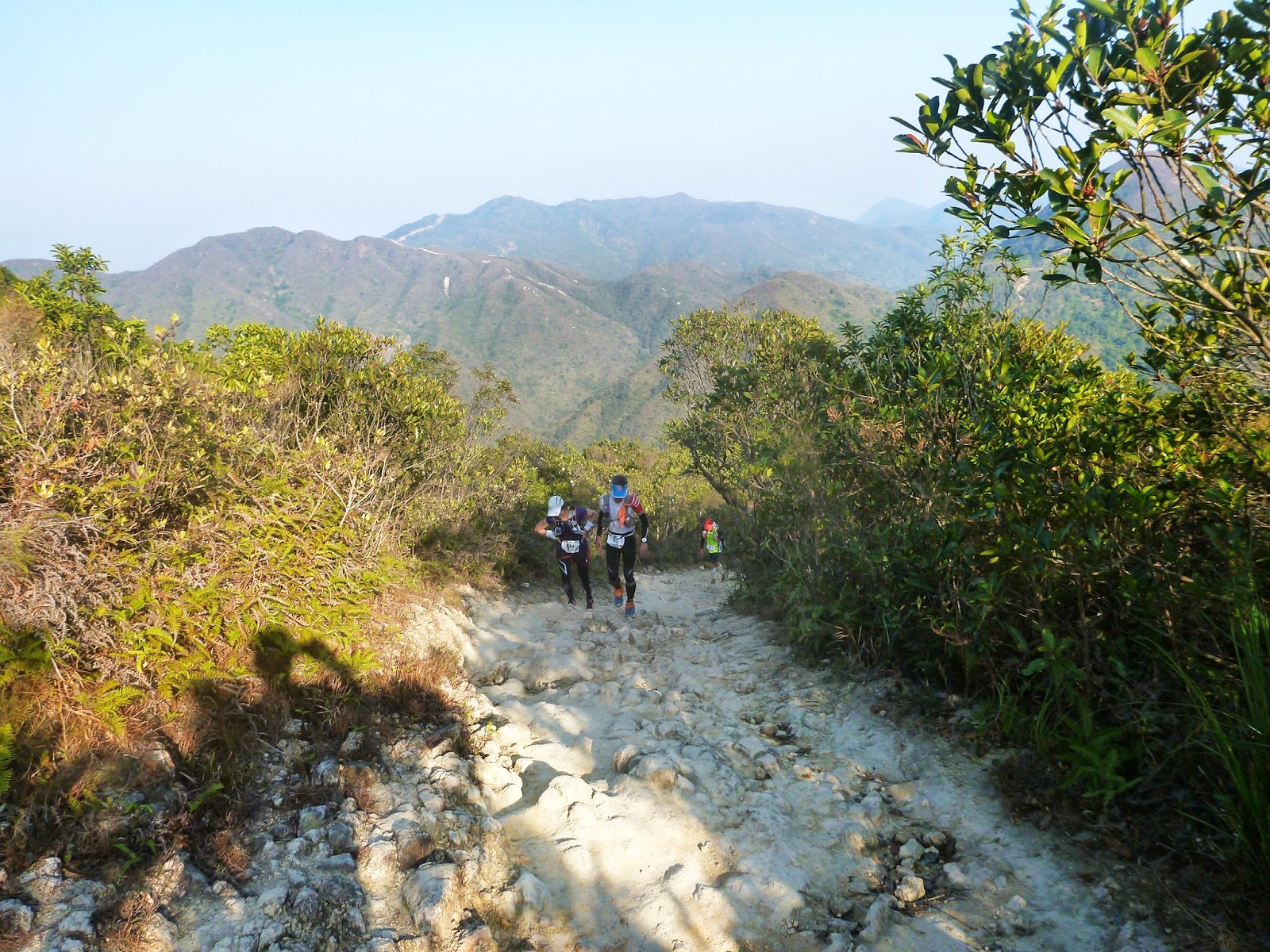 Each checkpoint was both first aid and feeding station, actually there were so much food I think I put on weight. The helpers at the rest stations were brilliant, we cannot thank them enough for the genuine care and support given to all the runners ( note this is a 34 hours cut off time race so you need to be committed to be a volunteer) 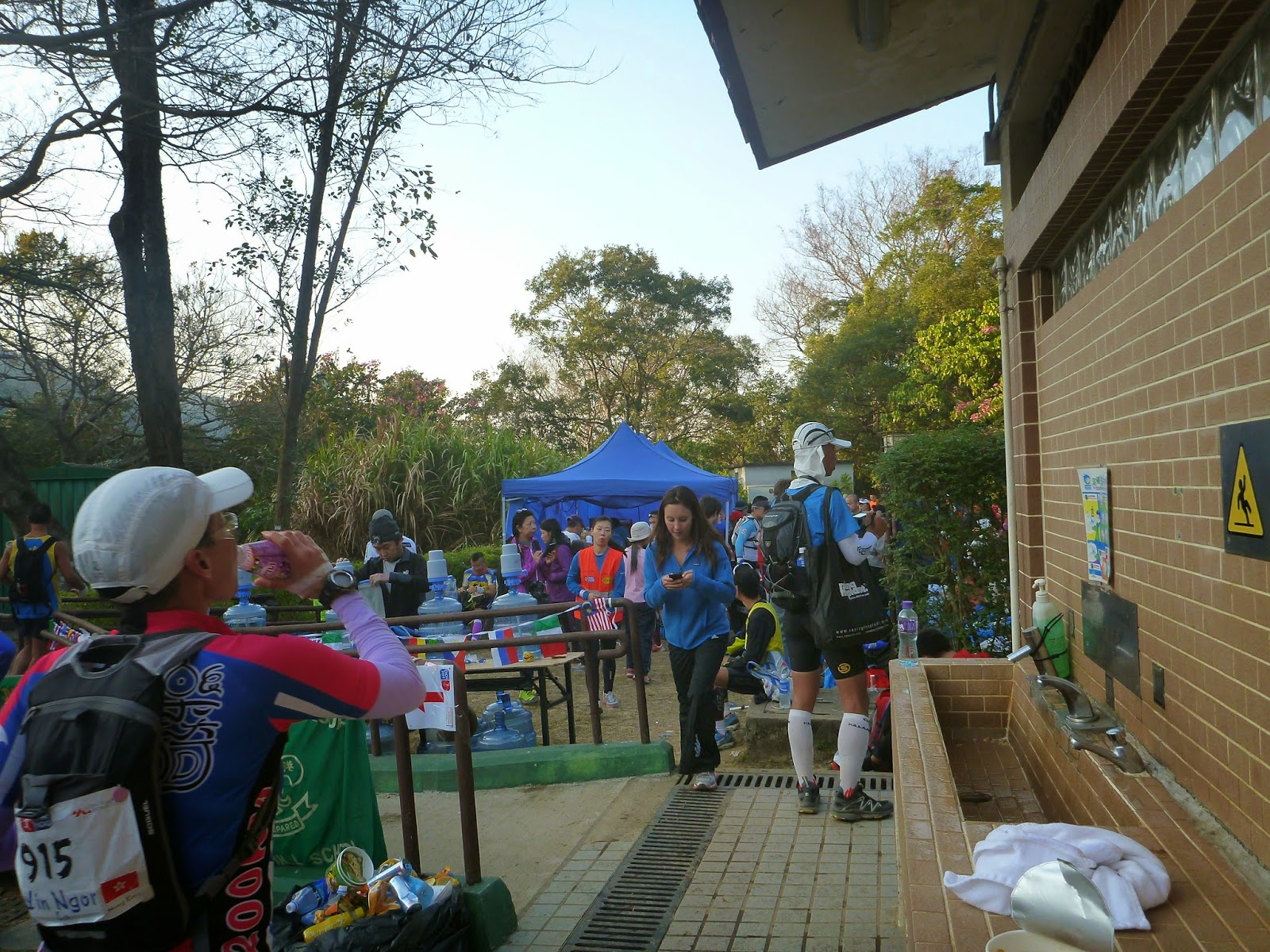 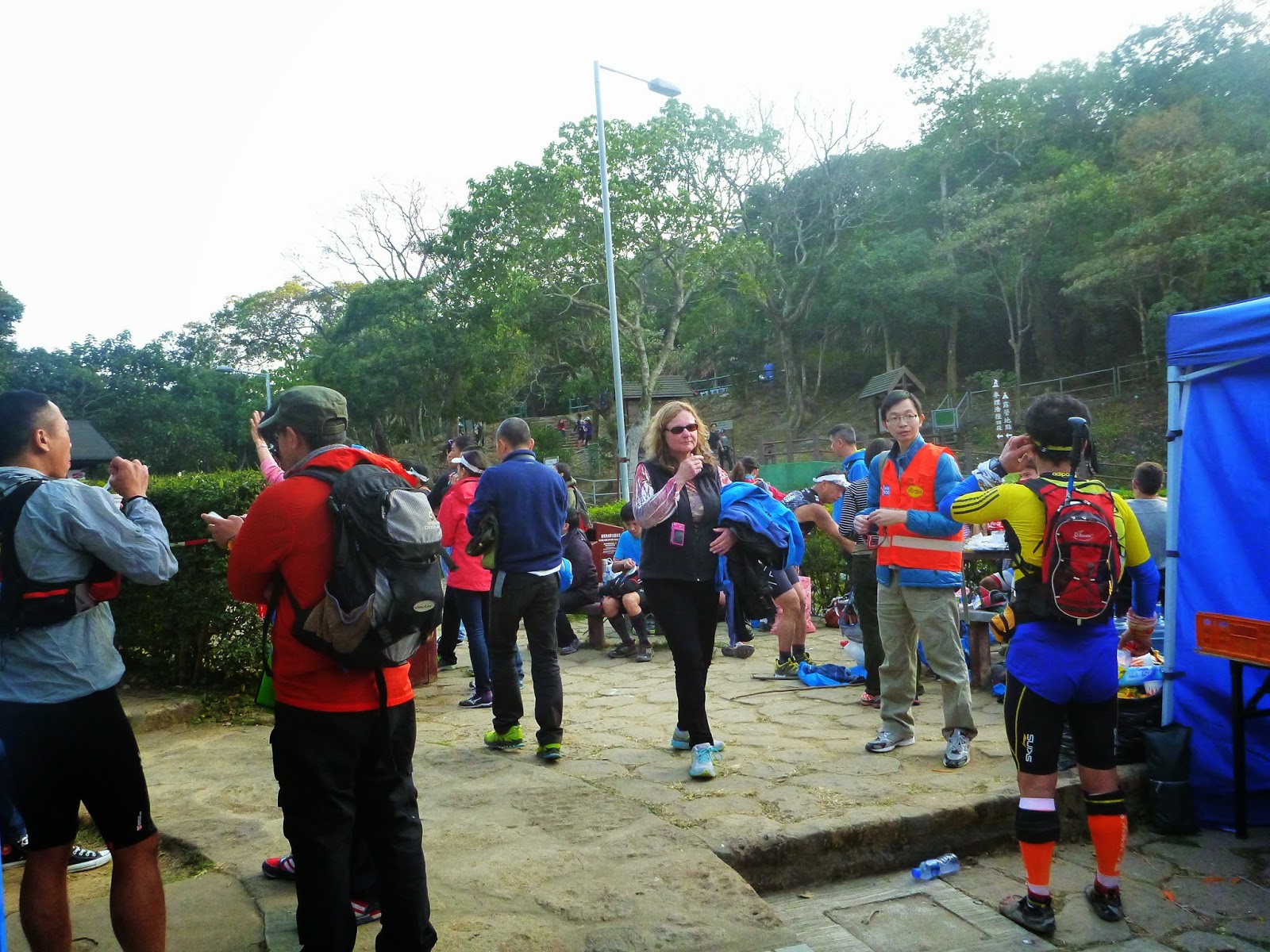 The race terrain was also beautiful with lots of spotless trails and climbs with steps, steps, steps and  more steps  approx. 4500m climbed in total. 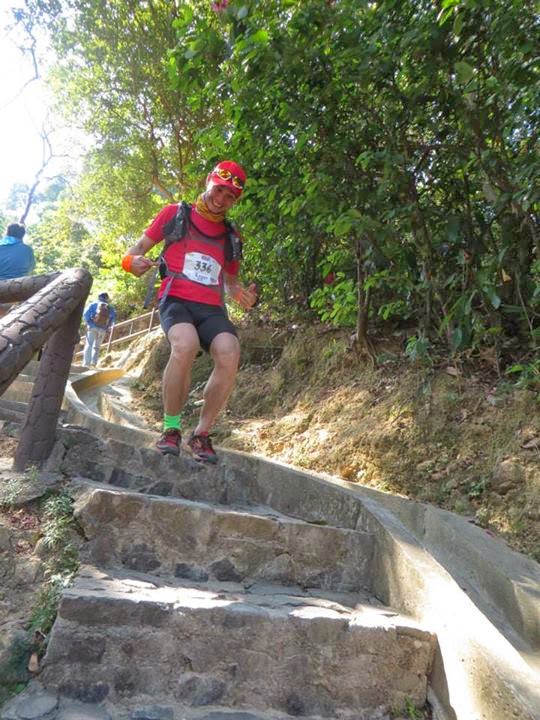 The weather was hot during the day and cooler at night so an extra top was called for, but most of the time I ran in a tee- shirt. For Roger and Kelvin they would say its due to their lower body fat levels so they wore more light layers to protect themselves from the cold. 🙂 Also when your body is tired, you will feel the cold even more so when we got into the rest stop at night we usually grabbed one of the blankets on offer to keep the core warm and later in the race I put on a Brooks wind breaker and neck warmer. 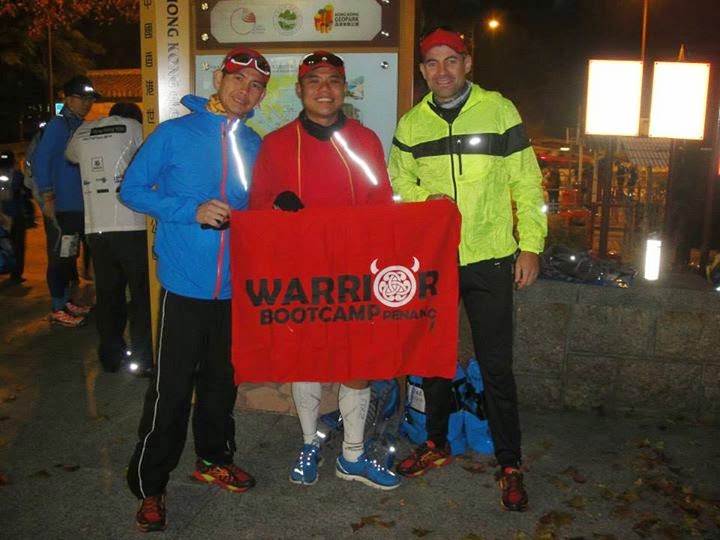 One thing we noticed about an ultra- run is that you will run into fellow competitors who had to stop along the trail due to tiredness or exhaustion.  Normally we would try to talk to them to get them moving again and encourage them to the next rest stop. Due to this I would recommend running with a buddy as its better for safety, motivation and conversations along the way.
My biggest challenge in the race was I hyper flexed my ankle at 25km. In fact we all had injuries; Roger injured his leg, Kelvin with his blistered feet.
However the team spirit was a great pain relief. One other thing I knew from previous tough situations was that you must have a sense of humour. I think we all laughed at the stupidest things. For example we got an impromptu karaoke session going when we caught up with a runner who was using music to keep himself motivated, in fact on any other day some of my least favourite  80S music (Leo Sayers ) . However it sounded like manna to the ears and highly motivational when struggling up a few thousand steps.  Also we met another runner with a head torch the size of a cars headlight! It looked like he was running in daylight while we were running in nightlight if you get what I mean 🙂  Good on him for finishing the race because  carrying the weight of spare batteries alone must have been colossal feat in itself.
After 90km you can feel the end in sight, however we still had one last large climb to go which we did it with heads down and lots of gutso. To be honest we felt great mentally and physically as we had prepared really well. We were honest with ourselves about the magnitude of the tasks we were undertaking and ran the race as we planned, not pushing at 100 % to ensure efficient energy management. Actually towards the end, not only we felt we were getting faster but also stronger.
When you see the finish line you get that great euphoric feeling, a sense of achievement that all the hard work has really paid off. Next of course you must pose for the regulation photographs. 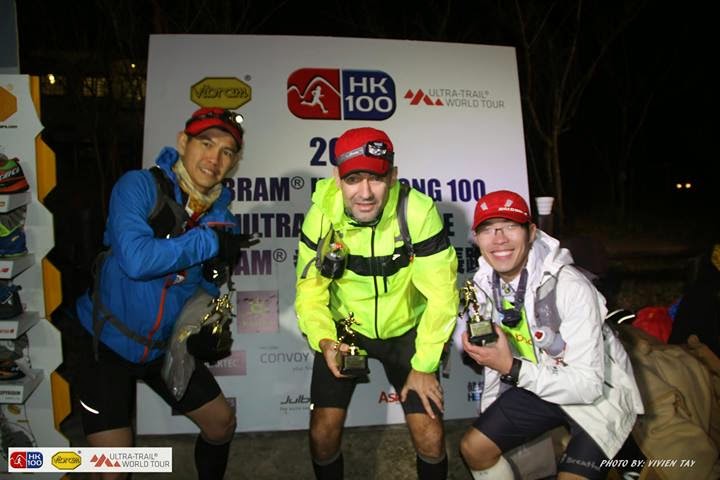 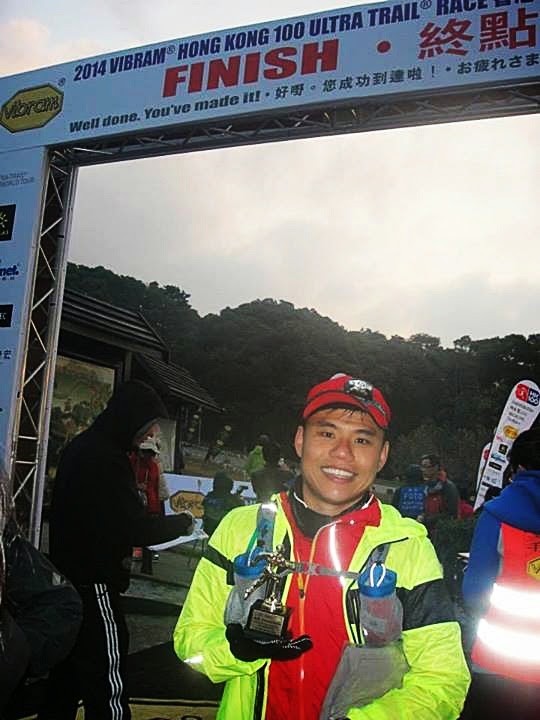 Actually every time I opened Facebook over the next few days I only saw Roger & Kelvins head haha (only kidding 🙂 ) . We then headed back to the hotel and slept for about 12 hours after which we indulged in the habit of all great Penangnites, which was to eat our way around HK. 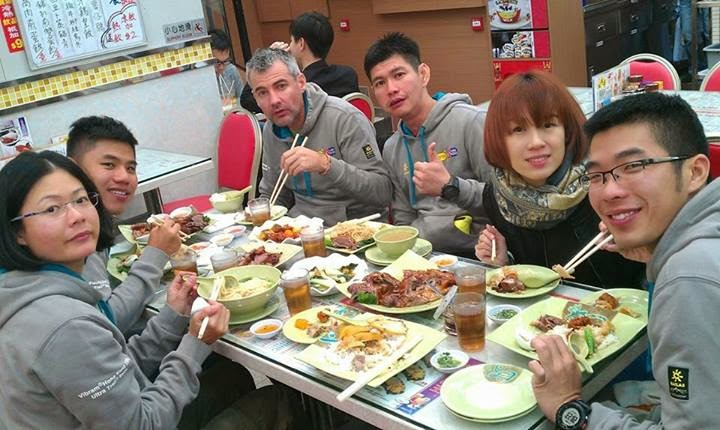 To conclude I would like to thank our comrades for the help and support, Roger, Kelvin, Wendy, Ming and also Shannon, another Penangnite who joined us along the way.  Not forgetting Michael from Brooks Malaysia for sponsoring some items we needed in the race and last but not least Sharon for the emotional support. So now onto the next challenge maybe a 150km if Im allowed 🙂 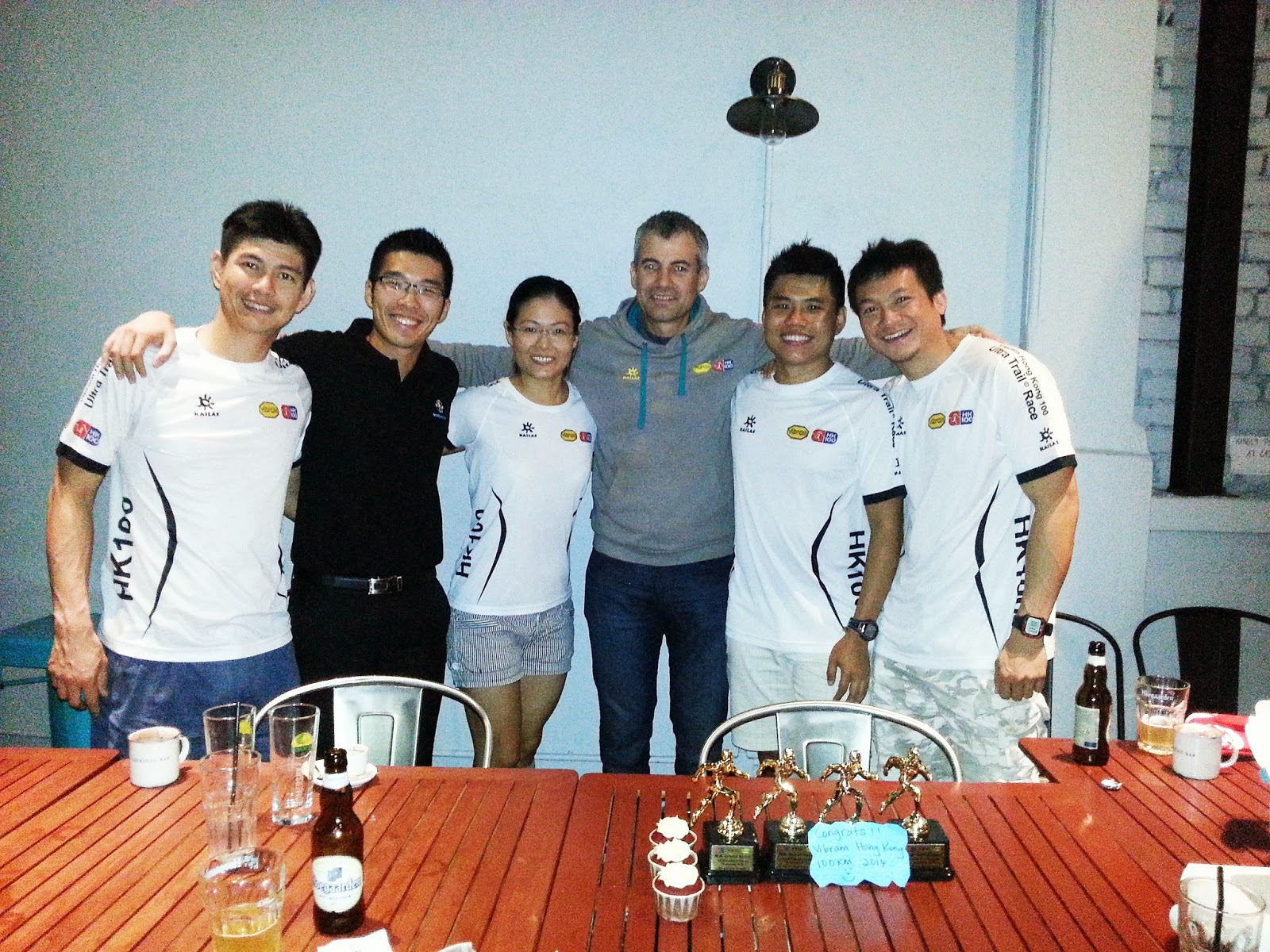