I must say, I didnt know what to expect at the Viper Challenge 2014. For all I know, its a half marathon distance with obstacles along the way. Call it ignorance but I didnt even bother to check out what the obstacles are like either; not even the photos or videos from Viper Challenge the year before.  All Ive heard were stories shared by people who attempted it last year. A friend said it was considerably easy, do-able and we should have no problem in it. But little did we know that this years Viper Challenge had different things in store. Obstacles are more and tougher.
We gathered a bit of intel from our friends who had done it  the day before. The stories they told, wow, probably enough to make me feel worried but at the same time gave enough adrenaline rush to want to get it over with.
Our slot was the earliest at 6am and we were required to be at the Sepang International Circuit by 4am to avoid long queue at the registration and bag drop counter, which means we had to be up at ungodly hours of 330am to get ready for the event. We reached the event venue by cab, walked across the carpark towards the brightly lit tents to obtain the event band indicating our starting time which was strapped onto our wrists.
And then the painful wait beganthe event was delayed for about half an hour due to the fact that the security officer has not given the green light to flag off the race. My teammates and I took the opportunity to squeeze in a little snooze and a short warmup session while waiting.
At approximately 630am, after a much enthusiastic effort to motivate and cheer us on, the emcee flagged off the race. We had to scuffle our way through the crowd for the first 500meters or so (this is when all the agility training comes handy ;)), and eventually when it was a bit more dispersed we broke into a slow jog. The idea was to get a little more ahead in front to avoid long queues at the obstacles later. The decision proved to be right later.
Now I wont describe in detail all the obstacles one by one, as there were about 20 obstacles altogether (besides, I lost count of the number obstacles halfway through :)) but lets just say Im glad all the consistent training with Warrior Bootcamp has helped to prepare me not only physically but mentally as well to face the challenges.
As ironic as this may sounds, I began to relate and understand Conors philosophy of what we, the locals would sometimes consider to be mad and different. So what if it rains? So what if we had to roll in the mud? So what if we had to brace ourselves to attempt something different? So what if we had to run up the hill with a backpack? So what if you’ve got a little bruise? The fact is, we have been pampered and too comfortable doing things in our comfort zone all this while.
“I will just stay with the gym because I am afraid of the sun and dirt, I refuse to go hiking for fear it will hurt my knees, I prefer to sleep in rather than to wake up early to train, I don’t think I will try bootcamp because it looks tough and I can’t possibly keep up, I’m afraid I will get sick if I run in the rain, I will get allergy if I roll on the grass too much”
We all want to have it all and yet not willing to commit and execute. Well then.. if you’re afraid of getting down and dirty, I think running on a threadmill in the comfort of your house is the best you can do because these are exactly the challenges we had to face in the Viper Challenge! 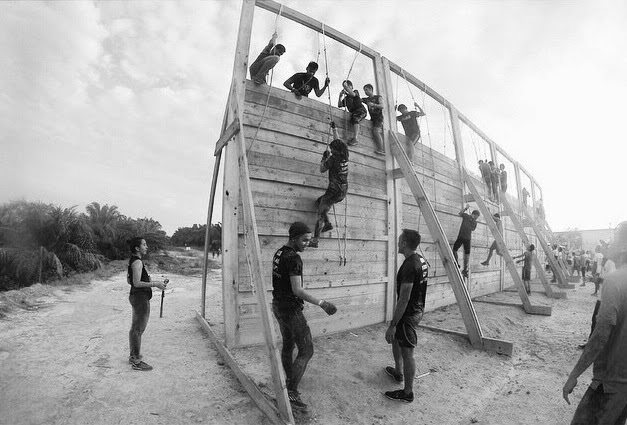 Scrambling, crawling, running in the rain, climbing up walls, endurance running, rolling in the mud, pull ups, agility…. it felt like were doing another round of the Saturday obstacle run training, only this is a bit longer. I definitely find obstacle runs more challenging and if I may add, more fun than normal running. For someone whos never really into long distance running, this is perfect for me. Perhaps its because I can pause to perform the obstacles and then pick up again.

Viper Challenge is also about teamwork. Its impossible to get through all the obstacles without help. As our team consisted of 2 ladies and a man, it was quite hard for the ladies to help our male teammate especially when it comes to strength based obstacles. Thank God for the friendly and helpful strangers we met along the way. Great teamwork was seen especially in the ‘Stuck in the Mud’ obstacle where everyone had to slide down into not one but several mud holes about 7 feet underground and try to scramble up the slippery surface again. Also the ‘Defying Gravity obstacle where one would need at least two persons to help them up the high incline wall, unless you’re 8ft tall then you’ll have no problem doing it on your own 😛
The warrior mentality was put to test at the last 5k of the course. After the 14k mark, when the energy level was low, tiredness began to hit and everyone was basically ‘zombiefied’, I observed that a lot of people would just skip the obstacles and continued walking. Instead, wed still try our best to run on the muddy surface, up the hill and attempt every obstacle that came our way. I admit, not all attempts were successful but the most important thing was that we tried, and warriors dont give up.

The last obstacle, called Arc of Triumph, was a great end to the obstacle course.
A few did it triumphantly without any help from the volunteers, some tried and failed, some tried and although succeeded, did it rather unglamorously. I’d like to think I belong to the latter category LOL but hey I did it! By hook or by crook we pushed through and survived the Viper Challenge! 🙂 *high fives team* we finished pretty early too thanks to starting at the earliest slot and frequent jogs most of the way. 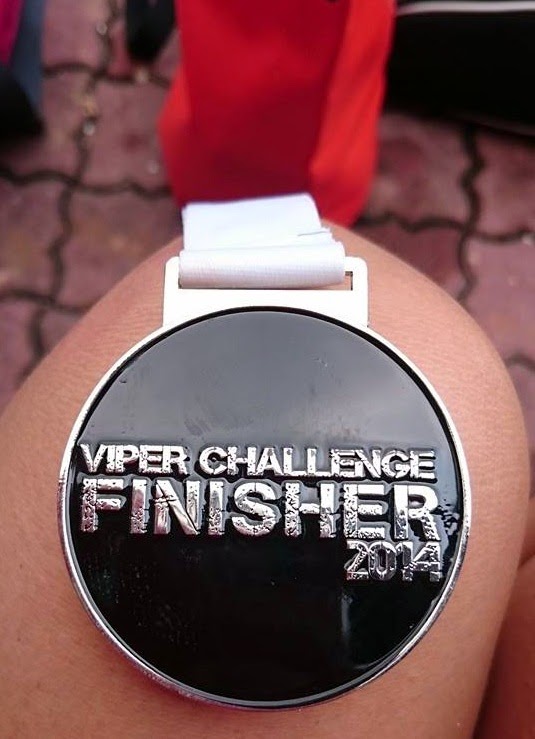 Thank you again to Warrior Bootcamp for all the great training. I never realize how much they have helped strengthen the mind, body and spirit. Also, not forgetting my awesome Warrior mates who braved, stayed and completed the challenge with me. Sure we came back with bruises, chafed skin and a bit of bloody knees and but it was expected. At least now I can say, we obtained the medal through blood and sweat. What an awesome experience it has been 🙂
pictures sources : Google & Instagram