The Beer Drinkers Guide to Running a Marathon

The Beer Drinkers Guide to Running a Marathon 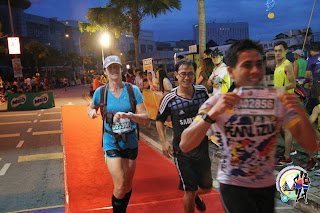 In my dream there is an annoying siren sounding, interrupting my slumber. I open one eye and realise its my alarm going off. Damn. 4am Saturday morning. Time to get up for a training run.
It was my friends idea to run a marathon. Back in May it seemed like a good idea. How hard can it be? Can a chronic beer drinker run that far?. I was about to find out.
My training for the Penang Bridge International Marathon, held each year in November,  started in August. Our first training run was 21km – a half marathon, so individual training had actually started well before then to get up to that distance. After that first training run, I was already thinking to myself there is no way I can run double that distance, yet pig headedly I persisted, sacrificing my Friday night beers and Saturday morning sleep ins to  get up in the middle of the night to run ever increasing distances.
Training became increasingly technical as our distances increased. It was a fine balance between eat, rest, sleep and exercise. Other things to consider were also what and when to eat, when to rest and what type of exercise to do. As it turns out, and science supports this, its pretty simple – if you want to run a marathon, you need to run a long way in preparation. Cross training has its place, but nothing prepares you for running long distances like running long distances. However, and science also supports this, you cant run too far too often, or you will suffer injuries and wont be able to run at all. So although its simple in theory, its really a fine balance between what the science tells us and what your own body can cope with. You have to work it out yourself.
Our training schedule became fairly standardised over the four months leading up to the big event – long run on Saturday, and during the week a couple of quick, shorter distances, and either intervals or hill running. Cross training also featured in the form of Warrior Bootcamp (bootcamppenang.blogspot.com) and Sunalinis Iyengar Yoga Classes (sunaliniyoga@gmail.com). Rest weeks were also important. There is only so much the body can do before it cant do any more, so programmed rest weeks were crucial, and I looked forward to these with anticipation! I also learned that sticking to the training programme is hugely important. A week in Bangkok with all the city has on offer does not qualify as rest, and neither does climbing Kota Kinabalu. After each of these distractions I was severely punished for my lack of discipline during my next long run. 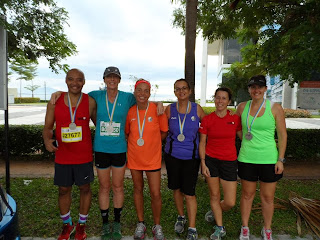 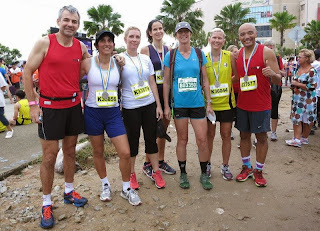 However, with only 2kms to go, my world turned black. I had hit the wall and there was nothing left. My left leg hurt between my hip and my knee and was doing funny things when I tried to thrust it forward. Everyone around me was walking, and I dropped down into their black hole of despair with them and stopped running. How could I go on when I couldn’t control one of my legs? But walking seemed ok, so I tried that for a bit. Then I tried walking faster. Then I saw a sign that read 1km to go and I forced my crippled body into a slow moving shuffle. The Chinese man beside me was making noises similar to those of a woman in labour, so I told him to keep moving forward. This seemed to have an impact on me, like it was someone else’s voice saying the words to me, and I picked up my pace. The Chinese man in labour stayed with me. We crept along the road towards the finish line, picking up our pace as we went. With about 100m to go I got sick of his labouring noises and wanted to beat him more than anything in the world, so in my head I looked like Usain Bolt and sprinted across the finish line. Then I hugged the Chinese guy.
I dont have an official time, as my e-tag stopped tracking after 19km, but my unoffical time was 4 hours and 56 minutes and 30 seconds. A bit slower than I had anticipated, but then I had stuck to my race plan and ran slowly until the last kilometre. At the time, there was nothing left in my body to allow me to experience an emotion of any kind, but on reflection, I am proud of my sub-5 hour marathon time. It is the tropics and it was my first marathon. 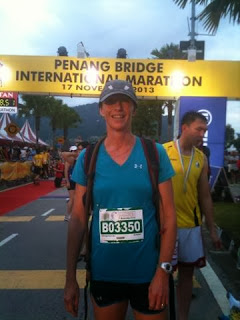 Now I know you are all wondering will I run another one?, and is it possible to drink beer and still run a marathon? Its only one day after the race, and I cant say I am tempted to run another 42 kms on the road. However, some of these off road ultra marathons look interesting. and no, its not possible to drink beer and run a marathon, especially not at the same time.
Mariane Wray – Marathon Runner.
Tips for Training for a Marathon:
Get a Training Programme that works for you, and stick to it: Train smart, train well. I went to a marathon clinic early in my training, and most of the problems people had experienced on their previous runs were due to a lack of training. To run a long way, you need to practice running a long way. Its not possible to get a good result if your longest run has been 15km, and you are much more likely to injure yourself. During the marathon, there were a lot of people experiencing cramps and unable to continue. This is generally due to a lack of training.
Do it with friends: Get yourself a training group. If I had to get up in the middle of the night and run for 3 hours by myself week after week, I would have packed it in. Often, the only thing that got me out of bed was the knowledge that I had people waiting for me before they could start their training run. Get yourself more than one training buddy and all run together, as injuries during training are not uncommon. You don’t want to lose motivation because you are the last man standing.
Rest: So, so important. Schedule in rest weeks every month, where your training is reduced. This doesn’t mean you dont train, just that you lessen the training every once in a while to let your body recover.
Research supplements: Good quality supplements assist the body in coping with the pounding it is taking from all the running. You lose so much running long distances in the tropics, and you have to replace the nutrients you lose. Running long distances reduces the efficiency of your immune system, so taking anti-oxidants and Vit C helps to reduce the effects of this and allows you to continue training. I also took L-Carnatine, Whey Protein, electrolytes and magnesium, along with my usual fish oil and multi-vitamins.
Eat good quality food: Its not possible to run long distances well if you’ve had McDonalds for dinner the night before. Whole foods and vegetables with protein based foods (meat) provided me with the best outcomes on my long runs. Avoid processed foods as much as possible, and as good as Fish Curry is, its not recommended as a pre-run meal. Thats when I learned that Tamarind is a natural laxative.
Stop drinking beer: Not completely, just not on the evenings before your long runs. I did drink throughout my training, but maybe only one or two beers after a long run, and not at all for the last couple of weeks. I had several beers after the marathon, and it had never tasted so good!
Recruit a Support Team: Having friends running the event with you, or parked up alongside somewhere on the route makes a huge difference to your emotional state, especially towards the end of the marathon when you are emotionally fragile.  One of our support crew ran the last six kilometres with my training buddy – priceless. Also, support from family and friends during training is critical. Having people who support your goal and can help out with child-minding and other tasks while you are training makes a huge difference (you know who you are!)
Dont do anything new on marathon day: Make sure you have used your training runs as practice runs for kit, clothing, supplements and food. Don’t do anything you haven’t done before on the day of the marathon – except for running further!
Enjoy running: There is no point running a marathon if you hate running. But if its something you are curious about, give it a go. You don’t even have to be good at running, as you get better during your training, or you get injured and stop. Penang has a great range of running events, so sign up for one and see if you like it!