Study shows women are ditching gym for great outdoors , WHY ?

Study shows women are ditching gym for great outdoors , WHY ? 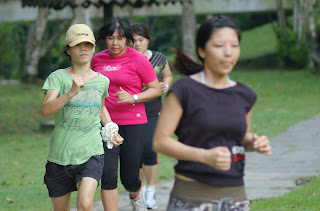 WOMEN are increasingly ditching the gym in favour of fresh air exercise, according to a survey.
They are taking to parks and playing fields to join group sessions like Bootcamp and Buggy Fit
According to a poll of 1,000 physically active women, commissioned by sports bra company Shock Absorber, the numbers opting for ‘green’ exercise has risen by half (52 per cent) in five years.
Dr Jo Barton, a lecturer in sports and exercise science at Essex University, said it was proven that exercising outdoors made people feel more positive than doing so inside.
She said: “Green exercise offers unique benefits compared to working out indoors.
“It significantly improves mood, self-esteem and restores mental fatigue.
“Added to this, people work harder when in a natural environment but perceive their workout to be easier.
“Training in the great outdoors also provides essential variety, especially with the changeable British weather  this maintains interest and reduces dropout whereas keeping fit indoors is more predictable.”
She said greenery and the weather acted as a “natural distraction” that meant people didn’t realise they were exercising so hard, and that group sessions tended to be more sociable outside too.
“There tends to be a lot more conversation going on with outdoor activities,” she said.
In addition, she said people tended to go to group exercise sessions more regularly because if you missed one “you feel like you’re letting everyone down”.
Shock Absorber is launching a campaign, called Get Out There, to promote the benefits of outdoor exercise for women
Source: The daily Telegraph