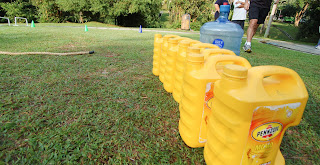 REGULAR outdoor exercise could halve the risk of suffering from poor mental health, according to a new study.
Activities in natural environments such as parks and forests have a positive effect on stress, mood and fatigue, researchers at the University of Glasgow found.
The study showed that exercising in “non-natural environments” such as gyms does not protect against poor mental health.
Professor Richard Mitchell, of the Centre for Research on Environment, Society and Health at the university, said: “I wasn’t surprised by the findings that exercise in natural environments is good for your mental health, but I was surprised by just how much better it is for your mental health to exercise in a green place like a forest, than in other places like the gym.
“Exercise anywhere is a good thing but exercise in natural environments has a greater benefit for mental health.
“Woodlands and parks seemed to have the greatest effect, so the message to doctors, planners and policymakers is that these places need protecting and promoting.
“The results suggest that making the decision to exercise in a natural environment just once a week could be enough to gain a benefit. Any additional use may have a bigger effect.”
Prof Mitchell said 8% of people who exercised regulary in green spaces were likely to suffer poor mental health while the number doubled to 16% for those who did not exercise regularly outdoors.
The research team studied the use of natural and non-natural environments for physical activity, such as walking, running and cycling.
Outdoor exercise had a positive effect on biomarkers, which indicate levels of stress and fatigue.
Studying 1,890 entries to the Scottish Government’s general health questionnaire, they looked at the association between the use of each environment and the risk of poor mental health.
Prof Mitchell added: “The information in the health survey gave us great information on a large pool of people but we did not have access to the type, duration or intensity of exercise.
“It would be interesting if we could conduct further research and establish a direct comparison between a run in a park and a run on a treadmill, for example.”
The research has been published in the Social Science And Medicine journal.
Source: http://www.independent.ie/health/diet-fitness/gym-exercise-no-good-for-your-mood-but-the-great-outdoors-works-3145143.html