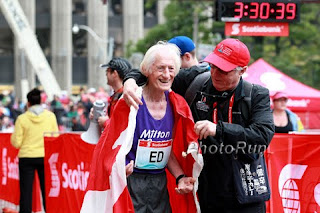 At the Toronto Marathon in October, Canadian Ed Whitlock set a new 81 year old age-group world record by running the 26.2 mile course in 3:30:26. This was more than 16 minutes off the previous age-81 best.
Post race, he said…“Based on the weather forecast of rain and significant wind, my goal was 3:30. Conditions seemed better than forecast as the race progressed and, based on a false appreciation of my preparedness, my initial pace was more ambitious. I realised sometime before halfway that I had made a big mistake and things were going to be difficult, and that’s how it turned out, as I ran the last 4K very slowly, nearly 9 minutes a mile against a stiffening breeze. On finishing I wasn’t that fatigued; the problem was that my legs had prevented me running properly. I put this down to the fact that I didn’t have a long enough period of high-mileage training before the race and the lack of race practice–it was only my third race this year because of my injury problems.”

At last year’s Toronto Marathon, Whitlock broke his own 80+ world record by running 3:15:53. The following month, he slipped on icy stairs outside his house and broke a rib. He wound up not being able to run for much of the first part of 2012.